Even though the area has been inhabited since the later epochs, and the presence of the well-preserved nuraghe Arresi, located near the church, shows it, the present country dates back to the late eighteenth century when, after centuries of abandonment due to the continued raids of barbarian pirates, The shepherds began to repopulate the area by building the first houses around the little church dedicated to Sant'Anna which is still present and functioning as a parish church.

All the beaches are characterized by the finest white sand, often with pink coral shades. The waters, with its beautiful blue and emerald shades, are almost always quiet and shallow to a great distance from the shore, offering the possibility of a safe bath for children and swimmers.

The large beach is divided into 2 parts, "first" and "second", separated by an old pier and a small canaletto that contributes to the newly restored ponds. They are sandy, white sand beaches, thanks to which the water has a distinct clarity and few rivals.

"Seconda Spiaggia", the most beautiful and sandy, 3km long, stretches over a narrow tongue of land between the backwaters and the sea, home to a long pinewood. It is more "wild" and beaten by winds and it is not uncommon to find numerous shells and minutes of coral fragments that flush the shore.

One of the most beautiful coves in Sardinia, with white and almost impalpable sand with pink shades on the shore.

"Spiaggia dei francesi", always clean, white sand with pink coral shades, softly degrading water and a thousand shades of color. It is surrounded by many coves, some secluded or even reachable only by the water.

A marvelous cliff completely nestled in the pines of Aleppo pines and secular junipers. Scenario loved by diving enthusiasts for the great variety of marine environments. For those who stay on the rocks, the pine forest offers a fresh and natural shelter for the hottest hours.

Porto Pino boasts some of the most beautiful beaches in Sardinia. Passing through the pond connecting to the sea, you will shortly get to the immense beach of Porto Pino, shaded in the dunes behind a pinewood of natural Aleppo pines, typically Mediterranean. At the end of the pine forest, south, at the beginning of the military area of Capo Teulada, you can see the tall dunes of Porto Pino, called White Sands, with secular junipers groves. A unique and evocative landscape that is constantly evolving offers scenery of rare beauty. Particularly fascinating the games of shadows and lights at sunset.

To the west, a rocky and jagged coast (Candiani resort, Porto Pinetto) is alternated by small and romantic beaches of fine white sand. Arriving at Porto Pino you will be welcomed by a vast area of ponds renowned for the presence of pink flamingos, cormorants and other wildlife and characteristic flora; The ponds are home to a pond. In the less crowded period, typically from October to May, flamingos are also very close. Extraordinary pink spots in the unfolded wings when flying elegantly in flight.

To the west of the first beach the Pineta Candiani stretches to the cliff of Punta Menga. A natural area dominated by Aleppo Pine, a variety characterized by very bright colors; Both the needle green and the particular silvery color of the trunk and the pine conifers form a unique color matching. The cliff is a fanciful succession of dark rock with high hardness with sandstone inlets forged by the wind and the sea. On the other side (north) of the area, beyond the promontory of Punta Menga, is the small beach of Porto Pineddu, with dune and pine forest system. Going north of the Porto Pineddu area, with comfortable dirt roads, you reach Cala on Turcu.

Very characteristic and still with the features of the small but not too touristy harbor we find the canal that connects the lagoons to the sea. From here you can go for boat excursions along the coast.

In the seabed of Porto Pino you can appreciate a great deal of marine flora and fauna: in the caves and creeks you can find corals, anemones, octopuses, multicolored sponges, nudibranchs.

The Mediterranean Cassiopeia medusa, a sciefomedusa of the Cepheidae family, is also often present. This species reaches 30 inches in diameter. It features a distinctive disc-shaped umbrella with a typically jagged margin, yellow or sometimes greenish for the presentation of Zooxantelle. It has short and large number of tentacles, ending with an apical button from blue to purple. It's not a creepy species. Typical is the presence of small trachurus trachurus species, Seriola dumerili, Caranx ronchus, Sarpa salpa, Boops boops, near tentacles.

The island of Sant'Antioco is named after the seaside town with traditions related to fishing. The beaches intercalated between the cliffs follow in very scenic scenery. The best known is the Maladroxia beach, on the most sheltered side to the mainland. Calasetta is a town that originates from the need to structure the port for sailing to the island of San Pietro - Carloforte. Also in the vicinity of Calasetta there are beautiful beaches and cliffs. Very impressive is the sunset over the sea to Carloforte from the tower, to conclude with the good cuisine and the animated night life of Calasetta.

The island of San Pietro offers fascinating and evocative natural scenery, especially at the far south the stone columns surrounded by the beautiful shades of sea color. The history of the city of Carloforte originates with the departure of a group of sailors from Genoa from the town of Tabarka in Tunisia.

In Sardinia the breathtaking scenery never ends and approaching the bay of Porto Flavia is really hard to resist the temptation to stop at every bend on the coast to photograph, or just admire, this panorama dominated by the island of Pan of Zucchero. The particular conformation of the rocks always calls attention from the beach. The converging shape of the creek and the declining backdrop produces very long waves, especially appreciated by surfers or even simply by those who enjoy the body-surfing, letting them drag out of the waves for long stretches, always paying attention to the dangers of sea. Cala Domestica is a beach inserted in a t-shaped cliff with interesting backdrops.

You can admire stupendous and sometimes impressive concretions: from stalactites to stalagmites, passing through the castles and cannulas to the rare eccentriche of aragonite which represent the main characteristic of the caves. The acyclic aragonites, appear as large clumps of needle-like crystals, also called by "cave flowers" speleologists; And the spectacular eccentric Aragonites (whose very high concentration in a single room makes the Is Zuddas caves unique to the world): filiform formations that develop in every direction without being influenced by gravity take on bizarre shapes.

You can moor the boats at the port of Porto Pino, which has 160 berths.

The regulation of the mooring is entrusted to the Candiani-Porto Pino Association. For any berthing inquiries please contact the municipality directly through its institutional site.

Porto Pino, a hamlet of Sant'Anna Arresi in the southwest coast of Sardinia, as well as having a beautiful sea also has an efficient sailing school: in the water mirror in front of the first beach from June to September there are organized sailing courses Various levels, with the use of Optimist Class, Laser, Trident 16, J24 and Windsurf; Held by qualified instructors F.I.V. In the utmost respect for safety, include theoretical and practical part and enrollment to the Italian Sailing Federation. 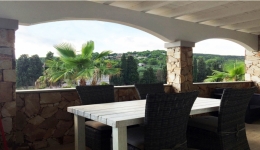 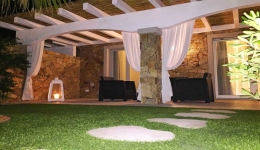 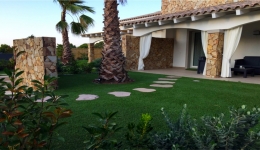